A Letter to Santa

Todd has insisted that I record a list of demands and send them to an elderly gentleman who (for reasons I cannot fathom) has decided to build his domicile at the North pole. Perhaps he is a fugitive from justice, and wishes his location to remain secret. That would explain the leverage with which we are extorting him, and while as a general rule I avoid blackmailing the elderly, Todd is being annoyingly persistent.

And so I must compromise my principles simply to shut her up.

I have this day been given (oddly specific) intelligence regarding your whereabouts, including current postal code and GPS coordinates. Should you wish your locality to remain a secret, you are required to deliver the following to the return address no later than December the twenty-fifth, in the year 2013. Do not make the mistake of testing my resolve.

I shall require one pair of arms. They must be fully functioning and of a size to fit an adult male. While I am open to the option of robotic prosthetic limbs, I will insist that they appear as human as possible. My sources inform me that this should not be a problem due to the advanced technology you possess in your workshop, as well as the numerous skilled laborers you have at your disposal.

Should you fail, rest assured I will not hesitate to hand over my information to the proper authorities.

ps: I have attached a photo to help you visualize the results I hope to achieve. 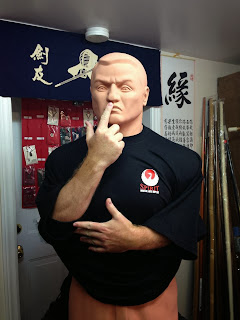